... you will find on our    event schedule page

The direct numerical simulation approach consists of solving the Navier-Stokes equations in their complete form, without any averaging or filtering accounted for by a model.

The code employed for this task is the code Parcomb, developed by Thévenin and co-workers [6].

Apart from the equations for continuity, momentum and energy, Ns equations are solved for the transport of chemical species, with Ns = 9 in the present cases.

High-order discretization is used in order to reduce numerical dissipation. In space, this is a sixth order central finite-difference scheme along with a third order differencing at the boundaries. In time, a fourth-order Runge-Kutta scheme is employed. The Navier-Stokes characteristic boundary conditions [7, 8]  are implemented taking into account detailed chemistry and thermodynamics.

Isotropic turbulence is generated in Fourier space with a von Kàrmàn energy spectrum with Pao correction [9].

In Fourier space, the definition of the kinetic energy E(k) is given by :

Furthermore, ke = 1 / Le where Le  is the peak energy wavelength, and kd = 1 / Ld where Ld  is the Kolmogorov  wavelength.

After the initialization, no forcing of the turbulent flow field is applied and the fluctuations are allowed to decay. The propagation of the flame is relatively fast, however, so that this decay is not too strong. Examples of calculations with Parcomb and postprocessing intended towards turbulent combustion modeling are available in [10, 11, 12].

The experimental setup of Weiss and Zarzalis, investigated in Projekt A9 of SFB 606, is considered as a basis for the present simulations.These experiments investigate isochoric premixed spherical flames, evolving in a cubic box (Fig. 1).The burning velocity and the Markstein number are determined. The Markstein number Ma is a suitable parameter to quantify  the influence of flame strech and has to be included in the modeling of turbulent flame velocity [3, 4, 5]. 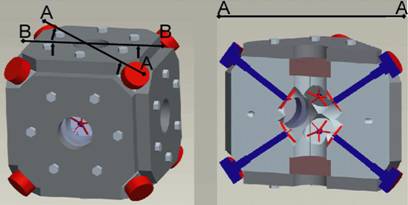 Parcomb is a fully parallel program with dynamic load balancing capabilities. The message passing library originally used in Parcomb is PVM. All the validations performed by the authors was

also using PVM. Thus, it was natural to continue using the program with PVM. PVM, however, is now superseeded by MPI and no more maintained on current installations. Hence, in a first phase of the project it was converted to MPI and fully tested and validated on the XC using HP-MPI.

An attempt to use MPI instead of PVM in Parcomb had been made previously during the development, using wrappers around the PVM calls. However, this revision was not validated and could not be compiled with the present installation. Most of the parallelizaiton calls were therefore rewritten. Tests with MPICH and HP-MPI served to avoid lacks of portability. The communication of the number of processors in each direction to all processes may serve as an example. The sets of original calls

coupled with the receiving instructions:

were replaced by a single MPI_BCAST instruction.

Since these blocking instructions are in the initialization part, they do not reduce the overall performance of the code. The code was then thoroughly tested against the serial version, both in 1-D and 2-D configurations and using different numbers of processors.

Benchmarking of the code was performed with a 2-D reacting configuration. The test case used corresponds to the 2-D ignition of a turbulent premixed hydrogen-air flame. Timings are presented for a scaled problem, which means that all nodes possess the same number of grid points (201 x 201 points and a 7mm x 7mm domain). When increasing the number of processors, the size of the domain and the total number of grid points are increasded proportionally. The simplest definition of the parallel efficiency is used here, i.e. E(N) = tCPU(1) / tCPU (N), where N is the number of processors. Since dual nodes were employed only even numbers where chosen.

Efficiency results are given in Figure 2 and corresponding CPU times are shown in Figure 3. These data show that the parallelization performs very well, with generally no decrease in the performance when using more processors. Of course, these results should not be used as a direct measurement of the performance of the machine,

but they can give some insights about the practical achievement of Parcomb on the XC. 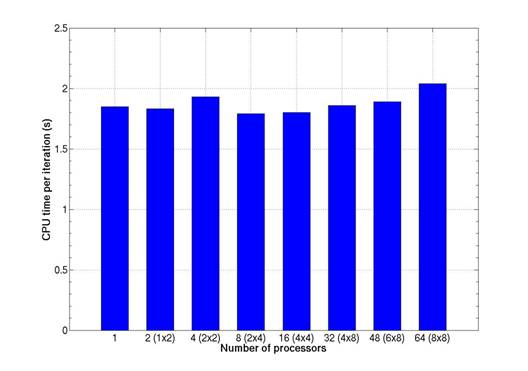 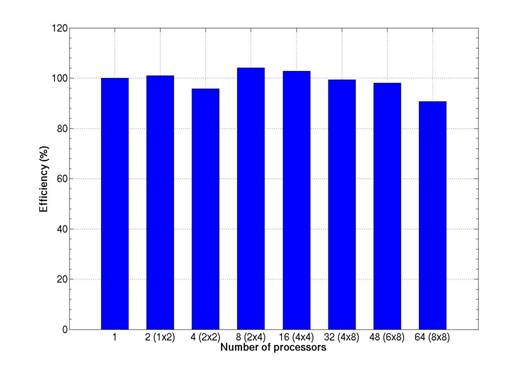 The present work is concerned with 2-D configurations of premixed flames. The main parameters of the simulations are :

One initial condition consists of a 1-D steady state solution that is extended to a 2-D laminar plane flame. Spherical flame in 2-D can also be computed.

The turbulent flow field is obtained from a 2-D turbulent kinetic energy spectrum. Velocity and concentration field are then superimposed. 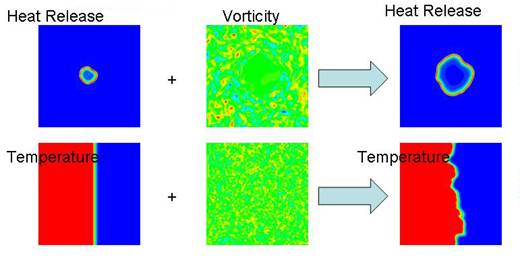 We consider a square computational domain, discretized with an equispaced grid in both directions.

To investigate the validity of this assumption for the H2 flame considered, two simulations were performed,

one with and the other without accounting for the Soret effect, with the following parameters. 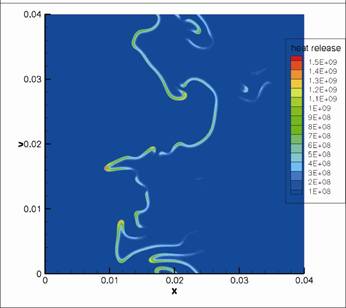 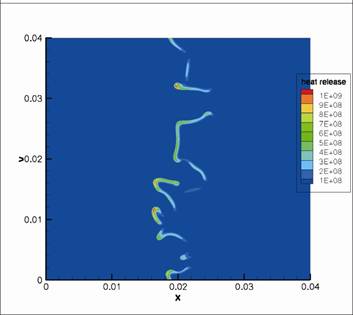 These results are in good agreements with the literature that indicates that Soret effect inhibits the diffusion of active chemical radicals such as H2O and OH around the flame front, thus making flame propagation slower.

Hence, the Soret effect will be taken into account in all our simulations.

As calculations have to be compared to experimental results, the same conditions have to be used in both cases. In Parcomb,a turbulence spectrum is generated in Fourier space with a random phase.

That implies a flow in real space without the correct physical structures. As described in the literature, physical structures appear with time, after one or two eddy turnover times. On the other hand, after one or two eddy turnover times, a decrease of the energy spectrum is generated due to dissipation (Fig. 7), the energy spectrum has changed and we do not obtain the turbulence field used during

What we did to avoid this problem :

With Parcomb, we create a reference spectrum. This spectrum has the desired amplitude u’, the rms value of turbulent fluctuations, and the desired length scale L, The phase, however is random.

The idea is to continue the run in order to have physically realistic phases but to maintain the energy level This is done by comparing the energy level during the run with the reference energy spectrum. The Fourier coefficients of the solution are then multiplied after each time step such that the initial spectrum is maintained

but allowing the phase to adjust to physically realistic structures. By inverse Fourier transform,the velocity field in physical space is obtained to continue with the next time step This is visualized in Fig. 8..

At the end, we obtain turbulent fields with u’ and L related to experiments and that possess physical structures.

As we want to reproduce the experimental conditions, modification of inflow conditions were needed. In fact, during all the experiments, the turbulence, created by the eight fans is maintained.

That is to say, we can not consider this turbulence as a decaying turbulence. We choose the following solution to avoid this problem.

During a run, at each time step we modify the inflow conditions (Fig. 9) 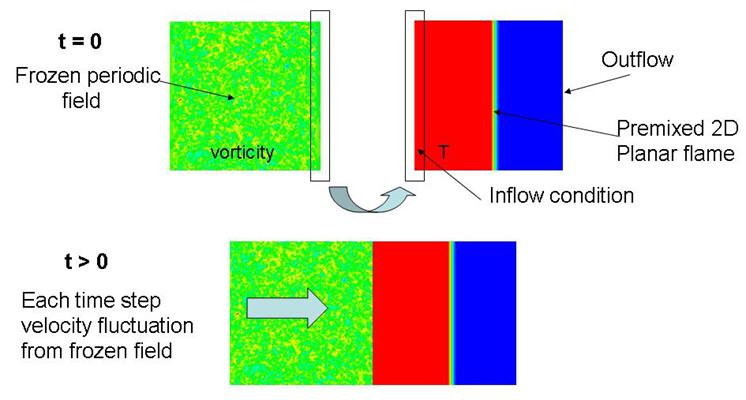 Figure 9 – Injection of turbulence at the inlet

From a frozen periodic field of turbulence (velocities fluctuations) previously determined as described above, slices are extracted and fed into the computational domain as inflow conditions.

Velocity fluctuations profile at the inlet + superimposed fluctuations field at the run beginning – Re = 305  u’/ Sl = 12.3 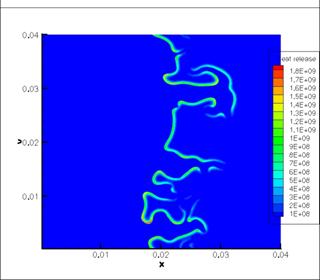 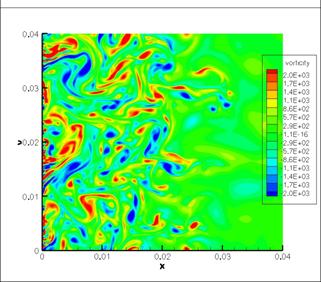 IV      Co-operations with other projects

Within the framework of the SFB 606, intern cooperations have been realized and are in progress.

results of the measurements. these are discussed extensively and routines for post-processing are exchanged.

A5:  In a cooperation with A5 (Class, Bruzzese) the present project provides the DNS result in order to compute modelling terms in the hierarchical model developed in this project

A6:  Together with A6 (Fröhlich, Wang) comparison of DNS data is undertaken.

Example : in A5 Project, the flame is considerated as a gasdynamic discontinuity

With the Class’s model, a small window (in red) is needed to build the flamefront (small contour in black in Fig. 14)

whereas we use an iso contour of YO2

The shape of the curves are similar even if the values are different, due to the two different definitions of the flamefront

[4]      T. Brutsher, N. Zarzalis, and H.Bockhorn. An experimentally based approach for the space-averaged burning velocity used for modelling premixed turbulent combustion. Proceedings of the Combustion Institute,29:1825-1832,2002.