... you will find on our    event schedule page

The adaptation of laser based imaging techniques, such as Mei-scattering, PIV , LII and RAYLIX to a combustion chamber of a real engine is complex. By designing the components allowing the optical access into the combustion chamber we took care that reflections from metal parts of the cylinder are avoided as far as possible. Additionally, the challenges and problems encountered for achieving optical access inside gasoline direct injection ROTAX engine revealed a more preferable use of flat windows instead of quartz glass rings (Figure 1). Figure 2 and Figure 3 show drawings of the cylinder with the cylinder head and an inside view into the combustion chamber.

Figure 2 and Figure 3 show the planned optical access for the single cylinder Diesel-engine. Figure 2 shows a drawing of the cylinder with the cylinder head, in Figure 3 an inside view into the combustion chamber is depicted. 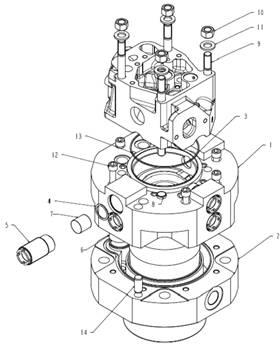 Figure 2: New cylinder design for the laser based techniques 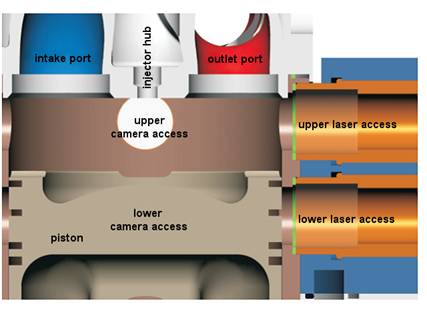 The RAYLIX technique is used to derive soot volume fractions fv (concentrations), particle number densities NV and mean particle radii rm of primary particles with a high temporal and spatial resolution. This technique utilizes the simultaneously two dimensional detection of Rayleigh-scattering and the laser induced incandescence (LII). The LII is based on the rapid heating of soot particles by absorption of intense laser light and the subsequent detection of the emitted thermal radiation. To obtain absolute soot volume fraction the LII signals are calibrated by means of extinction measurements for which the intensity of the incident and the used laser beam is acquired either on the CCD-chip of the Rayleigh-camera or form fast photodiodes by means of an oscilloscope. Using a frequency doubled Nd:YAG laser with a double pulse laser beam (modified Particle Image Velocimetry -Laser, PIV-Laser) the two dimensional Rayleigh scattering and LII signals have been measured within 100 ns by means of two image intensified CCD–cameras. By using a telescope consisting of a cylindrical and a spherical lens, the laser beams are formed to a light sheet. The first pulse emitted by the laser is a low energy beam which is used for measuring the Rayleigh scattering from the soot particles. The intensity of this beam is below the threshold for a significant heating of the soot particles. As a consequence no LII-signal induced by the low energy beam is detected. 40 nanoseconds after the low energy beam, the high energy beam is passing the probe volume inducing the incandescence of the soot particles.

Figure 4: Schematic setup of the RAYLIX-technique

The engine was operated at several stratified and one homogeneous mode. Representative results of one stratified and the homogeneous operating point are shown in Figure 5. Engine was operated at 1500 rpm, injection and ignition timing was 24° CAD (crank angle degree) respectively 8° CAD before TDC (top dead centre) in case of the stratified mode, while injection and ignition timing were 340° and 30° CAD before TDC respectively in case of the  homogeneous operation mode. RAYLIX measurements in figure 5 were averaged over 20 cycles and taken at 65° CAD after TDC, piston position is indicated.

Soot formation in both modes takes place on the piston top because of liquid fuel (poolfires). Particle size is, especially under stratified conditions, uniform. Soot, which is build during the flame propagation in the early stage of combustion (piston near TDC) is already completely oxidized.